Throughout history there has been discrimination when it comes to natural hair in the workplace. For years, men and women have been subjected to prejudices and sometimes sent home from their workplaces or schools for wearing their hair in its natural state or protective styles. But, with the passing of the CROWN Act (Create a Respectful and Open Workplace for Natural Hair) first passed in California, there have been strides to challenge and change the idea of professionalism and societal norms when it comes to ethnic and multi-cutural hair. Here are details of the CROWN Act:

The CROWN Act ensures protection against discrimination based on hairstyles by extending statutory protection to hair texture and protective styles in the Fair Employment and Housing Act (FEHA) and state Education Codes.The CROWN Act was originally signed into law in California, followed by New York and New Jersey. Since then, twenty-four other states have introduced the CROWN Act. These are great strides for this law, especially since the law was first signed in California just last year. 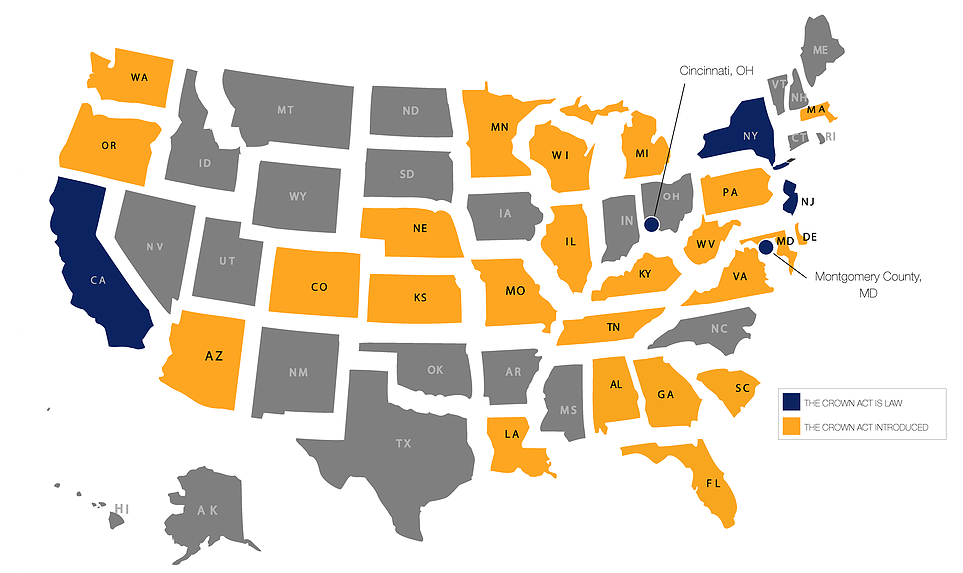 The law contains writing that acknowledges the Eurocentric patterns that the states have followed for years:

The history of our nation is riddled with laws and societal norms that equated “blackness”, and the associated physical traits, for example, dark skin, kinky and curly hair to a badge of inferiority, sometimes subject to separate and unequal treatment.

Black entertainers are praising the act, including actress and singer Keke Palmer and director Matthew Cherry. On Strahan, Sara and Keke, the ABC morning talk show, Keke presented a quick history of black hair and acknowledged the advancements the CROWN Act is making today :

The short film Hair Love, directed by Matthew Cherry, is a touching story of an African American father learning to do his daughters hair for the first time. This short story is so important because it changes the narrative of what a black family looks like. This narrative is very rare to see in entertainment, especially animation. Matthew Cherry speaks about how important representation is in the black community, the recent discriminations of school systems pertaining to natural hair, and brings awareness to the CROWN Act in his acceptance speech at the Golden Globes.

Along with the law itself, the CROWN Act has an organization called the CROWN Coaliation, which is an alliance of a diverse array of companies dedicated to the advancement of anti-discrimination legistation Nationwide. Dove,one of their well known contributors, conducted a study that included 1000 black and non black women, ages 25-64 who are employed full time.

Just to put this in perspective, these are just statistics for black women who work in an office or corporate environment, it doesn't include their male counterparts or black children in schools. With the rise of the CROWN Act, the goal is to change the face of history as we know it.