YouTubers everywhere are scrambling once again as YouTube has made another massive change to its policies regarding videos. While the change has been pitched as a good thing by the site, many content creators are feeling otherwise. So what are the changes?

YouTube is making another attempt to curb harassment and bullying on the site by tightening its policies on the type of content that's allowed and prohibited on the site. While they've had policies regarding harassment for years, they've broadened their definition of what counts as harassment. Now, they can demonetize or remove videos that "maliciously insult" another person over their race, gender identity, or sexual orientation. While direct threats have long been banned, the site has now also included veiled or implied threats as prohibited. Channels that have a pattern of constantly harassing or targeting others will end up getting removed altogether. These changes will be applied to both channels and comment sections meaning that they'll be removing significantly more comments than before. 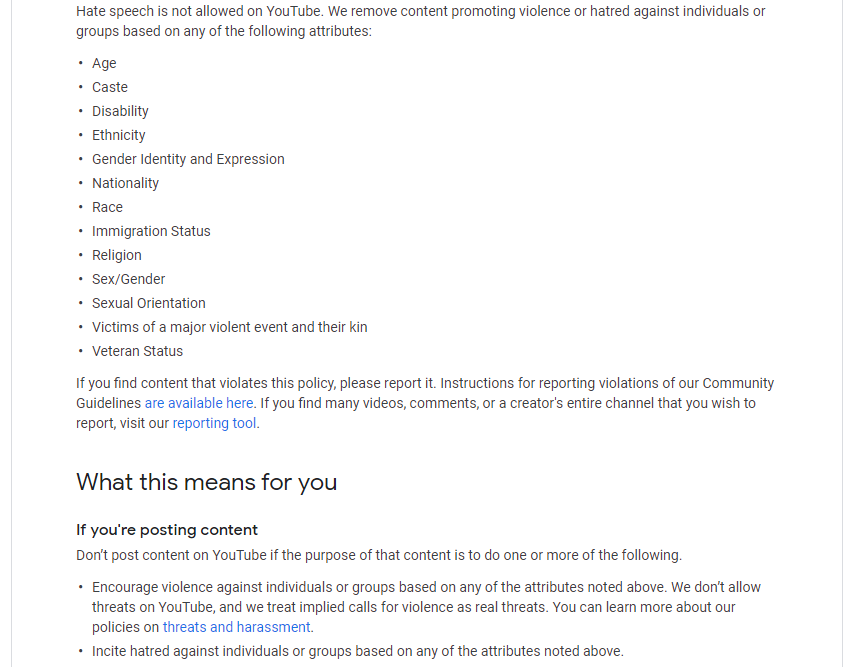 These changes come as a result of a journalist named Carlos Maza who brought attention in June to a YouTuber named Steven Crowder. Despite the fact that Crowder was constantly launching racial and homophobic insults towards Maza, the streaming giant initially did nothing because they said that Crowder wasn't actually breaking any policy rules. It was only after they faced a peak level of backlash that they went back and demonetized Crowder and promised to make much needed policy updates.

The rule changes look good at first glance but already people everywhere are taking issue with them. For one, because they've made their definition of harassment more vague, it's opened more channels up for potential penalization. Drama channels and any YouTuber who criticizes fellow content creators run the risk of getting in trouble for constantly targeting their criticism at the same people.

On top of that, YouTube has constantly faced criticism for penalizing channels that are relatively harmless while not doing anything to channels that promote racism, homophobia, or other hateful ideologies. Even with the new policy changes, many believe that not much will really change for the truly harmful channels on the site since YouTube has a pattern of ignoring them in the past.

It's still too early to tell how these policy changes will really play out but one thing's for sure. Actions speak louder than words so unless YouTube really focuses on better execution of their policies, they'll just remain words on a screen.